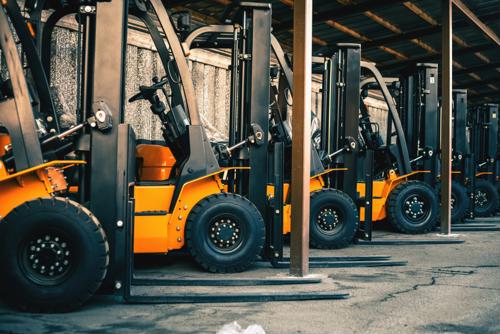 Most industrial workplaces these days will have at least one forklift on site to move heavy loads around, and it's important for workers to remember that such machinery inherently poses a danger. For that reason, both the people operating these vehicles and those working alongside them need to be more careful about how they get the job done as forklifts go from Point A to Point B on an ongoing basis.

That includes the following steps for improved forklift safety that the individual should take on:

1) Use the right forklift for the job

As with any other tool, there are right and wrong forklifts for certain jobs, according to Graphic Productions. Some are designed to carry wider loads and be pushed like they are bigger, more powerful pallet jacks. Others are for extremely heavy loads, and are therefore counterbalanced and have pneumatic tires. Some are intended to be used only indoors, or only outdoors, on certain kinds of ground, and so on. A little studying will help you understand what constitutes proper use.

As a general rule, forklift operators and workers who load pallets should have a good idea of what could be a potentially unbalanced or unstable load, but they may proceed to transport them regardless, Graphic Productions advised. For that reason, people working around where forklifts operate should visually inspect any load in transit to see if it looks dangerous, and steer clear when that's the case.

Just like people shouldn't get behind the wheel of their personal vehicles without buckling their seatbelts, the same is true of someone driving a forklift, according to EHS Today. If, for instance, a forklift tips over sideways, the driver could fall out first and risk having part of their body crushed or pinned under the machinery. Wearing the seatbelt properly reduces that risk significantly.

4) Wear PPE when working on or around the lift

Wearing personal protective gear in a factory setting is a good idea no matter what you're doing, but when working around a forklift, it's even more important, EHS Today added. That means wearing safety gloves, goggles, hard hats, steel-toed footwear and potentially also ear protection. It's just a good policy overall.

5) Know the route in advance

Drivers should always be careful to walk a forklift's intended route before they actually drive the thing, because it's not always easy to predict smooth sailing, according to EHS Daily Advisor. Someone may have carelessly left debris in the way, or a new pothole or crack may have formed in the pavement they're driving on. Especially when the load is going to make it difficult for drivers to see in front of them, this kind of inspection is vital.

Finally, it's better to be safe than sorry when it comes to operating a forklift near places where lots of people will be working or moving, EHS Daily Advisor further cautioned. It's not always possible, and other workers should certainly keep their heads on a swivel, but a route that's as far from other people as possible is usually safer.