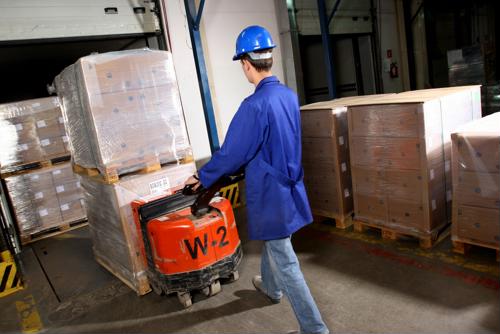 In a manufacturing facility, it's important that workers are properly trained on all aspects of safety that could affect them in the course of their normal work, however unlikely that may be. One area for factory worker safety training that often gets overlooked, or perhaps just glossed over, is how to safely use pallet jacks. These devices can pose unexpected risks for unaware workers.

As such, you need to educate your workers on the following pallet jack safety issues, among others that might be unique to your operations:

1) Don't put feet or hands under it

This is a simple one: Pallet jacks can carry thousands of pounds and for that reason, workers should never put any of their body parts under the machine, according to Lantech. While the risk of a failure may be low, you never want to risk it and if there's anything important under the jack itself, it's probably easier (and certainly safer) to just move it and retrieve the object after.

2) Adjust use to the environment

Often, common sense is a strong enough weapon to combat most risky behaviors, and employees should have that fact hammered home to them, Lantech advised. For instance, if they are coming to an incline, they should always keep the jack in front of them so it won't run them over. When other people are around, be aware of how users might pose a threat to them with improper behavior.

3) Think about the plan before using it

Users will typically know how they need to use the jack — "Take this from Point A to Point B" — and can consider the best way to do so in advance, according to Grainger. They can mentally map out the right course to avoid greater risk, and then proceed with caution.

4) Take the load into consideration

Along similar lines, users should adjust their behaviors to account for the loads the lifts are carrying, Grainger said. If they are large and heavy, users can take that into account, but if they are relatively small or light but unwieldy, that will require an entirely different approach to jack operation.

5) Use heavy-duty gloves and footwear

In any industrial setting, people should be wearing all the right protective gear, and when using a pallet jack, thick work gloves and steel-toed shoes are a great option, Grainger further warned. This will hopefully insulate workers against a number of notable risks and always put them in the best possible position to operate a jack safely.

6) Don't walk backwards with it

It's always a good idea to know where you're headed, whether using a pallet jack or not, according to Safety Toolbox Topics. That means walking while facing forward, rather than pulling the lift backwards, which should never be done under any circumstances.

7) Check its condition before and after each use

Just as you would inspect any other tool before using it for industrial purposes, workers must carefully examine the lift to make sure it's in good working order before use, Safety Toolbox Topics cautioned. Likewise, once workers are done with the equipment, they should ensure it's put away safely and ready for the next user.