Amid trade war, some aspects of manufacturing still going strong 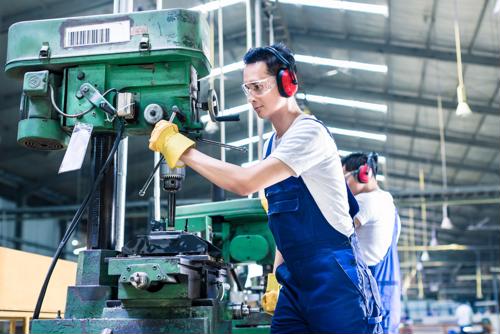 The manufacturing industry has run into some hurdles in recent months as the U.S. trade war with China picks up steam and more tariffs are being levied on imports going either way across the Pacific. In August, the confluence of all these concerns led to the manufacturing industry slumping for the first time in years, but nonetheless, some positives were seen industry-wide.

The level of overall economic activity in manufacturing took a step back in August, falling to an index reading of 49.1 from July's 51.2, according to the latest Institute for Supply Management's Report on Business. Any reading under 50 indicates contraction, and this represented the first time the manufacturing sector wasn't growing in almost three years. Of the 11 aspects of the industry the report covers, only one - supplier deliveries - was north of 50.

However, it's worth noting that three other aspects tracked in the report - inventories, prices and backlogs of orders - all improved in August, even if they remained below 50, the report said. Many of these issues seem to be the result of the Trump administration's trade policies; new exports slipped the most of any portion of the report, falling nearly five points, to the lowest reading (43.3) of any aspect of it.

"Respondents expressed slightly more concern about U.S.-China trade turbulence, but trade remains the most significant issue, indicated by the strong contraction in new export orders," said Timothy Fiore, chair of the ISM. "Respondents continued to note supply chain adjustments as a result of moving manufacturing from China. Overall, sentiment this month declined and reached its lowest level in 2019."

The big picture
Since the U.S.-China trade war began, the ISM's index has fallen about 10 points, and now stands at the lowest level seen since early 2016, according to MarketWatch. As recently as mid-2018, the reading was north of 60. This all comes against the backdrop of an economy that is still in growth mode, though it is slowing down, and experts are now beginning to wonder whether there is any potential stopping point for the downward swing as long as the trade war continues.

Ian Shepherdson, chief economist at Pantheon Macroeconomics, told MarketWatch the outlook here is "grim," though some regions are certainly showing strength even if the overall national picture is dimming, the report said. Moreover, if the downturn continues, there could be job losses in the broader economy as well.

What happens next?
In light of the growing concerns about a potential economic downturn, the Federal Reserve Board has already voted to slash basis interest rates for the first time in 10 years and will likely do so again in the near future, according to The New York Times. Meanwhile, it's worth noting that just because there is a one-month downturn in the ISM's report, that may not portend any looming economic issues in and of itself - after all, this data follows 35 months of improving business. There were dips under 50 in the overall index in both 2012 and 2016, neither of which was followed by a serious economic downswing.